Bobcat sightings in a Westchester County village prompted police to alert residents to protect their homes – and primarily their pets – from stray feral cats.

Police said there were two to three reported sightings of the animal by pedestrians near Rockinghorse Trail and Country Ridge Road in Rye Brook – a suburb 34 miles north of New York City – on Sunday.

Authorities have told homeowners to close their garage doors to prevent furry intruders from seeking warm shelter for the rest of the winter.

On Sunday, Josh Stern saw a bobcat hiding near his home where he lives with his wife, two young children and a small dog.

“We’re just making sure the fence is always closed and being careful the kids aren’t out there unsupervised at this point,” Stern said.

It is unclear if the same bobcat is seen multiple times or if there are a few. Police believe the cats in Rye Brook, which has a population of around 10,000, may be living on a golf course near Blind Brook Country Club, but then they started roaming.

“They look a lot bigger in the photos,” said NYS wildlife rehabilitator Megan Apicelli. “People zoom in and you know they’re freaking out because they’re not used to seeing these animals.”

Experts advise residents not to feed bobcats or leave food for them. Yelling or making other loud noises will scare bobcats away. 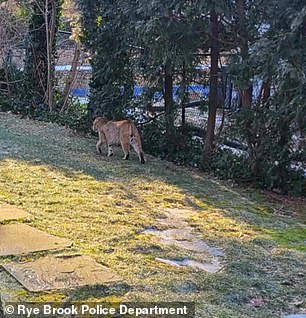 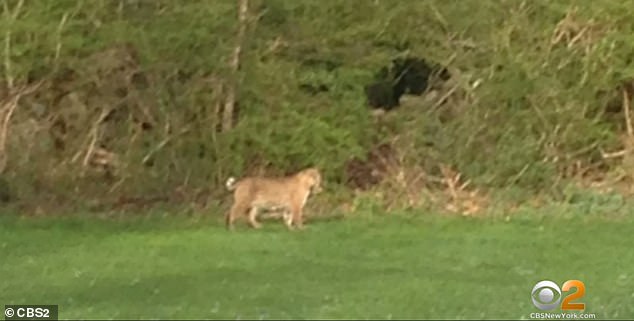 Another bobcat was spotted in a field in Westchester County over the weekend. Cats rarely attack humans but it is still advisable to take some precautions with animals

“While bobcats are a very elusive and rarely seen species, it’s not unusual for us to hear of sightings in Westchester County,” DEC wildlife biologist Mandy Watson told ABC7NY. “They sometimes appear in suburban areas, where food is often plentiful. With the amount of green space surrounding the Rye Brook area, it’s no surprise that there seems to be a bobcat hanging around.

“It’s really terrifying because you know they’re ambush predators, they can take things really quickly, and you don’t know how to protect yourself and your animals,” said Rye Brook resident Bruce Depaola.

According to the Department of Environmental Conservation (DEC), bobcats are found in about a quarter of the state, including the Adirondacks, as well as the Catskill and Taconic regions. New York’s bobcat population is around 5,000, thanks to state restoration efforts in the 1970s and 80s.

It is also the most common wildcat in North America, found in 47 states and parts of Canada and Mexico. The American bobcat population has been estimated at between 2,353,276 and 3,571,681 individuals. The population of Mexico is not well known, being found mainly in Sinaloa and Nayarit.

Bobcat attacks on humans are very rare, according to Watson. However, it is always advisable to stay away from animals. At night, residents are asked to keep dogs or cats in the house indoors, as they may be attacked.

Bobcats are nocturnal, solitary, and territorial. Males are, on average, a third larger than females. Both sexes can weigh over 30 pounds; however, the averages for men and women are 21 and 14 pounds, respectively.

Authorities recommend that dog owners walk their animals on a leash during the day and any farmer with farm animals should ensure they are in a secure, predator-resistant area. In New York, free-roaming felines have been known to eat white-tailed deer, rabbits, and hares.

“They eat deer more often during the winter than at other times of the year and will store or cache carcasses for future use,” state officials told Patch after a bobcat was seen in White Plains, a few minutes from Rye Brook, two years ago. “Deer can be valuable prey in deep snow areas, as a carcass can last for several weeks.”

Bobcats are about twice the size of a domestic cat and generally smaller than the Canada lynx. Their coat is dense, short and soft. It is generally shorter and more reddish in summer, but longer and grayer in winter.

Some have more prominent spots while others have more faded markings. Their faces have conspicuous long hair along the cheeks and black tufts at the top of each ear. 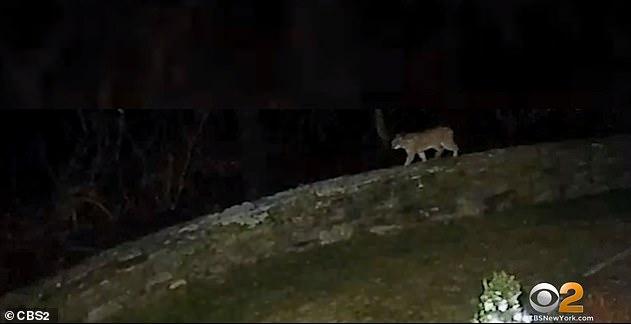