Geelong manager Chris Scott has hailed Tom Stewart as the AFL’s best defender after he played a starring role in the Cats’ 42-point win over Adelaide.

Jeremy Cameron scored four goals for the Cats and Tyson Stengle netted three against the club that eliminated him over a year ago following a series of off-field incidents.

But it was Stewart who shone brightest as Geelong put up a tough third-term challenge and scored seven of the last eight to win 15.7 (97) to 7.13 (55) on Saturday at the GMHBA stadium.

Stewart finished with 40 eliminations and was crucial in fending off opposition raids as Adelaide dominated the clearance battle (32-16) in the first half.

“It’s hard for people who aren’t on the ground to see what the form looks like and Tom Stewart was sensational today,” Scott said.

‘Just sensational today’: Tom Stewart received praise from his coach and could do no wrong against Adelaide, fending off raid after raid and recording 40 possessions 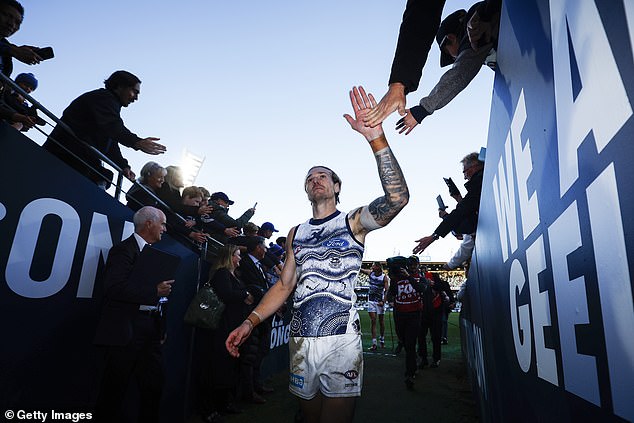 “If we didn’t have him behind the ball and they won saves, it would have been very difficult for us.

“But it was something that, to have that (stopping) ascendancy, they were willing to let us have.”

Stewart played a key role in Geelong’s 7-4 start to the season after missing last year’s final campaign with a foot injury.

“I’m biased but I think he’s the best defender in the game,” Scott said.

“I live in a filter bubble, I understand that, but he’s improving from a very high base.

“He is very important for us and he was crucial last year.

“Losing him before the final was a big loss and I think we see exactly what a loss it was right now.”

Adelaide manager Matthew Nicks made some changes as he tried to stem Stewart’s influence but didn’t seem overly concerned with the defender’s performance in his post-match assessment.

Nicks pointed out that part of Stewart’s assignments came from kicking. 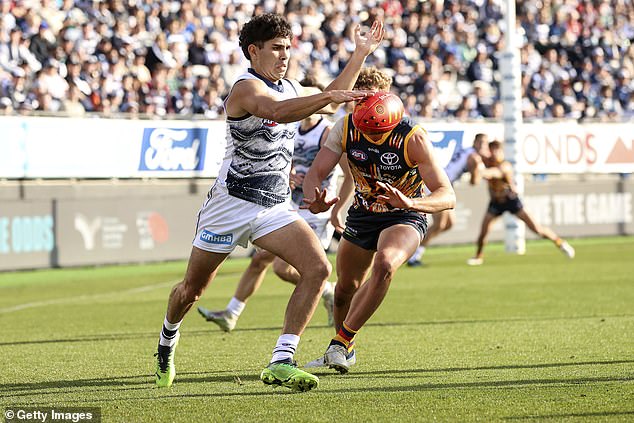 Extra motivation: Tyson Stengle pitched three majors against the club who dumped him for off-field issues in 2020

“They’re creating form on the pitch really well as a mature group and they’ve been able to do that, and he’s the guy they like to release,” Nicks said.

“It’s pretty hard to stop in that space, but he’s had 40 (eliminations) a number of times and they’ve lost footy games.

“We would like to have limited his use of the ball and we know that is a factor in the game, but we do it by scoring goals and not giving 13 more chances.”

Cam Guthrie (34 takedowns), Brandan Parfitt (30) and Joel Selwood (24) were busy in midfield for Geelong and Tom Atkins put down 17 tackles, while young great Tom De Koning got up in defence. 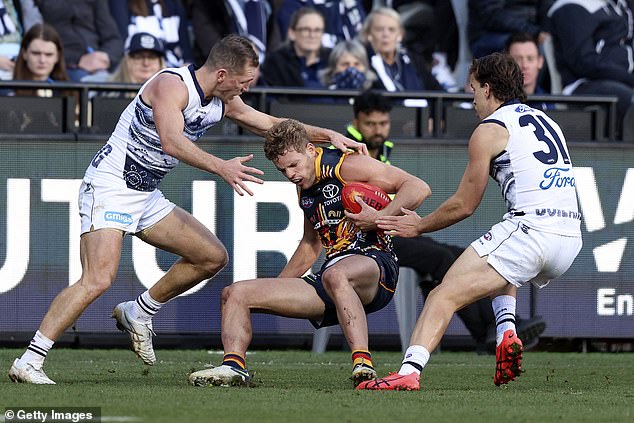 Adelaide’s Mitchell Hinge catches the eye of Joel Selwood (left). The Crows challenged strongly in the third quarter but fell apart after that

Adelaide ruckman Reilly O’Brien was called up after a short stint on reserve and fought hard in a losing cause, racking up 28 takedowns, 24 contested possessions, 46 hits, nine clearances and seven tackles.

The visitors had to substitute defender Jordon Butts out of the game with a concussion and Lachlan Murphy suffered a broken nose.